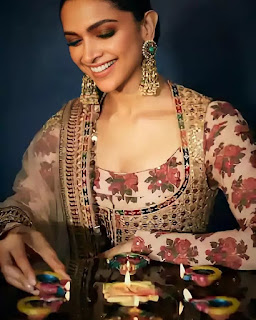 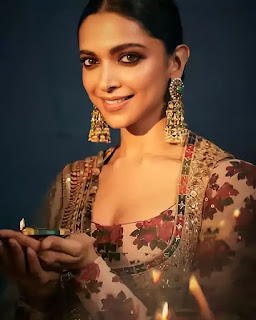 Is there such a thing as an underrated Madhuri Dixit dance? Yeah, there are several!

MD - like we know her - ok, 'the' Madhuri Dixit is currently the finest Bollywood dancer alive on film and stage today. The recent lot of actresses - no offence - are no match when it comes to the lethal combination of dancing prowess, grace, expression and preternatural skill set that has been honed to perfection over time, practice and holy dedication. I don't mean 'whole' but as in divine.
What she has is God-given, you can emulate it, but not replicate it.

Some snowflakes took umbrage when, on the chat show Koffee with Karan, this exchange happened:
Karan: Which one of these item songs, could you have done better? Munni Badnaam Hui, Chikni Chameli or Fevicol?
Madhuri Dixit: All of them.
It was a rather off-the-cuff remark but never a truer sentence was spoken. She can indeed do a better turn than any of the contemporary actresses, bar none. And she proved it. During her IIFA performance in Macau, Mrs Nene grooved to not only the usual roster of songs from her past, but did an original spin on contemporary numbers. And she excelled.
There's a fine line of difference between abhimaan (pride) and swabhimaan (self-respect), ahenkaar (arrogance) and wajood (identity). Her identity as a celebrity is purely linked to her excellence as a dancer. La Dixit is a confident and capable artist who knows her merits - and is completely aware of her weakness and limitations too. She knows she can't do the rubber-limbed dances of Prabhu Deva, but she'll match him step by step when she can. She may not be able to do the aerial dynamics shown on current dance reality shows - but she isn't trying to either.
As a trained classical dancer who has dedicated a near-lifetime to the craft, the poise and perfection of Madhuri Dixit cannot be denied. You may not be a fan of the person or persona, but objectively there are few dancers on earth who can do what she can - even at this day and age.

Most Bollywood fans can reel off a long list of her incredible on-screen numbers with ease; the usual suspects like Choli Ke Peecheh, Ek Do Teen, Humko Aaj Kal Hai, Chane Ke Khet Main, Dole re Dola come to mind. Each of them garnered her choreographers several awards too.

In the list below, there are a handful of dances that never get mentioned or counted simply because the movies tanked and the music wasn't as popular on the charts.

We paid close attention to the choreography and the perfect execution of the numbers and feel, espouse that all you aspiring dancers, pay attention to the steps, her expressions and in particular, the sinewy smooth finish of her hand movements - she doesn't throw away her fingers at the end of a step, there's a polish from beginning to refined end.

I can't explain it... except through woeful comparison. A dancer that's often talked about but I can't stand to watch is Sandhya in Jhanak Jhank Payal Baaje (1955). Between the exaggerated expressions and the lack of finesse to her dancing - sacrilege! - yeah I said it, I find all the songs and dances painful to watch when she moves. She throws away her steps, there's an exhaustion of movement as opposed to completion of one. The exaggerated acting might have been indicative of that era of film-making, but we don't cringe at Nutan, Vyjanthimala or Waheeda Rehman's dances. They had a timeless quality to them - and we are pretty sure the same can be said of Dixit's diva-licious moves.

MD, even in her weaker films (Good lord she was a part of several God-awful movies) danced almost perfectly from her early hesitant steps to the cine screen. The rise and fall of her movements were not only in perfect sync with the music and lyric, she had the grace and facial mobility to entrance the viewer in imperfect movies. Her early flop films - but hit songs come to mind like Laila Mar Gayi, I love you, pyar karo choo...

Eg, the song that comes to mind, and really, the reason why we wrote this entire feature; Baaju bandh from Prem Granth. The title song of was a loud duet, the romance number shot in South Africa was... well, rather meh. But this group number with several delicate movements is gorgeous. Perfectly in sync background enhancing much of the number. Jungle main sher is also well executed by the garish colours give us a headache. Ipso facto, Baaju Bandh was chosen for this curated list;

Song: Tum Bansi Bajate Ho
Film: Khilaaf (1991)
Choreographer: S. Raghuram Satyanarayan
Chunky Pandey was... a lucky hero. A less than capable dancer, more comic than truly tragic, even the choreographers let him get away with whatever he could and diverted attention to Dixit. Even the song by itself sung by Alka Yagnik and the under utilised Manhar Udhas, is quite lovely...
Song: Tere Pyar Main Sanam
Film: Jamai Raja (1990)
Choreographer: Saroj Khan and Chinni Prakash* (*Don't know who did the choreography for this particular number as both are credited in the film!)
Anil Kapoor's efforts show - be it in acting or his dances. He's a good actor, often a great one, but a dancer... well, fortunately when paired with Dixit, he seemed to be better by osmosis and proximity. We love watching this little ditty - also for the nostalgia of the early 90s! 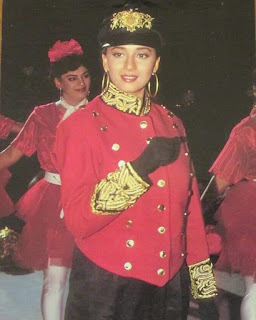 Sun Beliya was the chart-buster that year from the film, but when it came to dancing, Le Le Dil and the lol-tastic Gabar Singh Yeh Keh Kar Gaya are better dances.

Bollywoodites have a short memory span, so here's a refresher; before there was Prabhu Deva, there was Javed Jaffery!

'The' dancer/actor most leading ladies were afraid of partnering with, as his choreography was next level, 99 percent of his co-stars never matched up... and then came Madhuri!
Not only did she match him step for impossible step, with her expressions and oh-so-pretty ways, quite frankly, she outshone him. Sorry Javed sahab...
#TBH, even you know when Madhuri's dancing - no one's looking at anyone else.

Gabar Singh's super fun to watch but the steps in Le Le dil are incredible! 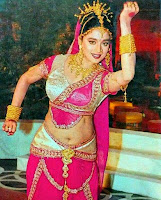 In the cacophony of the early 1990s, the mostly semi-classical songs and dances of Sangeet were such a jarring aberration on the charts. But for a handful of hardcore Madhuri fans, few have seen K Vishwanath's severely underrated film and dance extravaganza.
There are other songs that hit the charts and fared better in the Top Ten list; like Oh Rabba Koi Toh Bataye and Main Tumhari Hoon, which borders on the intentionally tasteless....
But as this listical is purely about the dance, the severely difficult semi-classical steps in Saat Suron Ke Taal is the only one worth watching again. And again.

We have to state for the wildly ignorant, volatile and vocal, these are semi-classical dances and not classical Indian dances. There are - but for a few notable exceptions - no classical dances in Hindi films. The Bollywood dance form is a mélange of several other art forms filtered for film and is not a classical anything... but a a new fangled entity of its own. It is neither Kathak, nor Bharatnatyam, its not Kuchipudi or Bhangra, its a mishmash of everything put together. Hema Malini on stage did pure classical numbers, Hema Malini on film did semi-classical Bollywood numbers. The extra inch added to the thumak, the gaudy dance outfits and makeup (the orange eyeshadow in Sharaafat title song would make Trump blush), the lack of sharp perfection makes it all film dancing semi-classical Bollywood oddities. Dance teachers across the region retch when you state you saw a classical number in a Hindi film! No! No you didn't. You saw a Bollywood number that's a soulless shadow of a classical number! It's inspired by but is a diluted version of a historic art form, for the new fangled thing that is film - created in 1913. Bharatnatyam's origins trace back to 300 BC! Kathak's origins trace back to the Mughal era. Film dancing is such a novel entity, its greatest exponent - Saroj Khan - just died a few weeks ago!
Ok, off our soap box; now to the dance, Madhuri Dixit in brightly coloured Amrapali outfits is gorgeous to watch. Jackie Shroff is another famed non-dancer (where did Tiger Shroff's dancing genes come from?!) she was partnered with, who strutted around sets, and rarely joined in. Man knew his brooding strengths, not his dancing weakness.

The film and song came out during the peak of Discman and mp3 players. This - Jaane woh Kaisa - by the shrill Kavita Krishnamurthy is PAINFUL to listen to, as its such a high pitch. The dance however, is breathtaking. Madhuri Dixit does a rambunctious solo in top light and darkened background, that's physically complex and exhausting - and she does it one glorious take so well. Not a great film, not a great song and poor lyrics... but we've seen it just for that bit she does with perfect execution.
Below; rare pic of Rikku Rakesh Nath (Madhuri's famed and feared manager, producer of the flop film), Madhuri Dixit and the choreographer of all choreographers; Saroj Khan, during the making of this finale dance number. 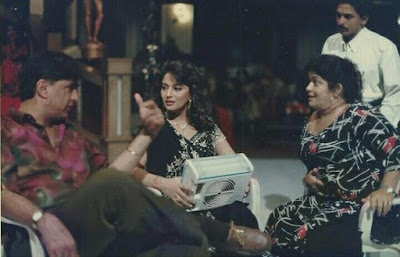 Post Script: BTW there are a few dances where the choreographer failed greatly. Either over awed by the stature of the leading lady or those who got complacent - cough cough Saroj Khan for the songs Idlee doo, Dil Loye Loye, Gale main Laal tie.... etc.
In Madhuri 2.0; when she returned post marriage and children, all her song and dances have been incredible. The choreographers knew they were getting the best so they stepped up; be it Ghaghra, Gore Gore Mukhde Pe Kaala Kaala Dil, Aaja Nachle, Hamari atariya pe...  Now, if a song and dance routine is less then great, the fault lies entirely on the dance director. - that fear alone makes them excel. 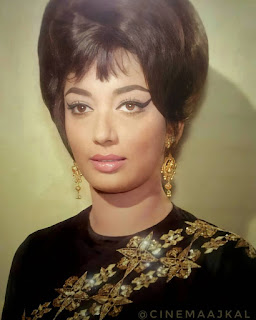 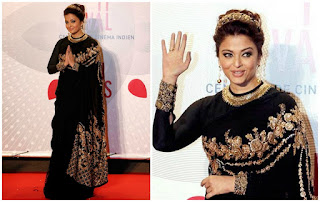 Sadhana versus Aishwarya Rai! Bollywood icon of the 1960s Sadhana in a sari that looks alarmingly like... Aishwarya Rai's from her Cannes red carpet in 2013! Black and gold is not an uncommon pattern but this had us message Diet Sabya. lol

Which reminds us, Aishwarya Rai-Bachchan was wearing Sabyasachi Mukherjee saree for the occasion.

Guess if everything comes back in fashion - and a saree is timeless! 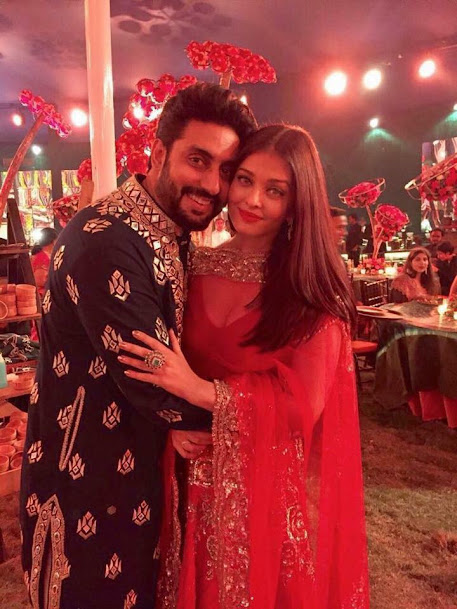 From past. As in a covid era, Diwali celebrations are so... tame... 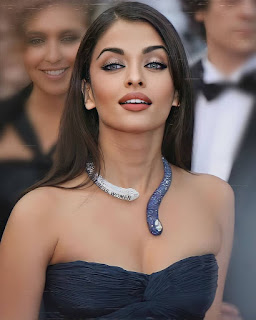 The stunning blue-eyed gal of Bollywood rocks the red carpet of Cannes Film Festival - TBT to 2006. 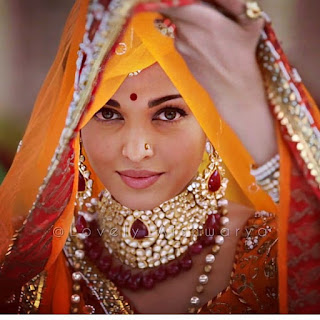 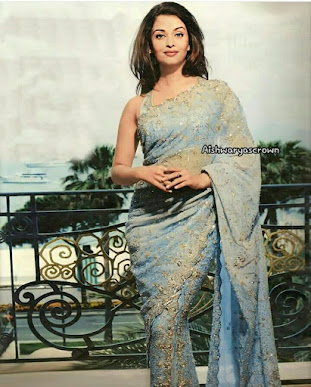 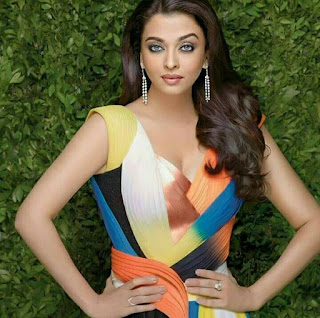 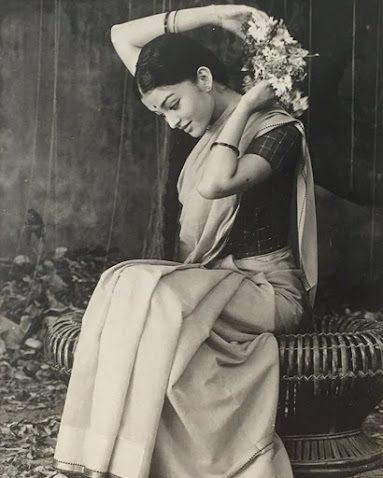 Aishwarya Rai, age 23, during the making of her first Tamil film, Iruvar. 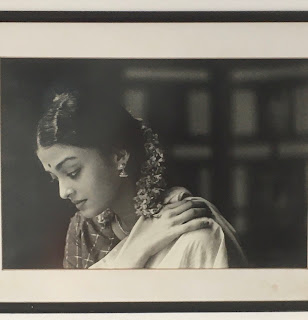 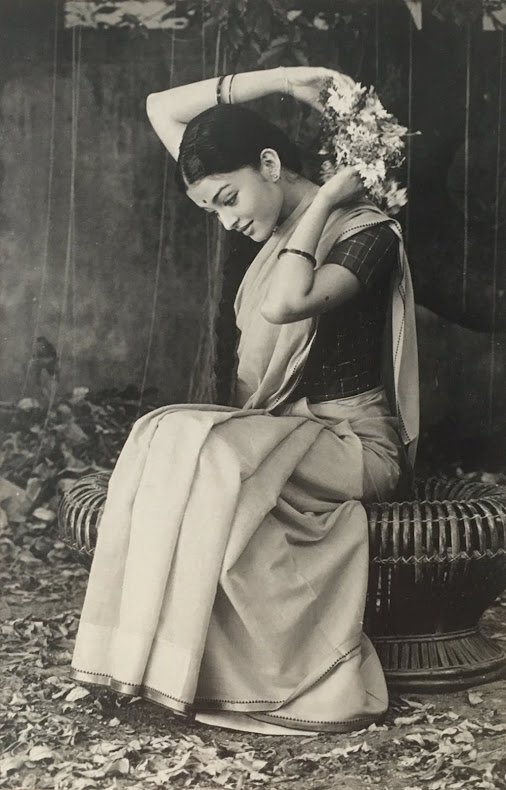 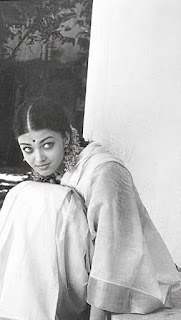 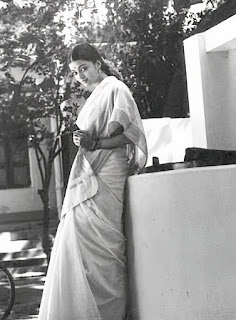 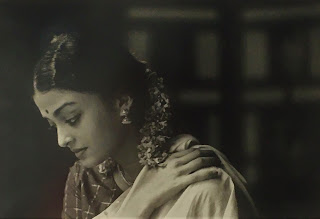 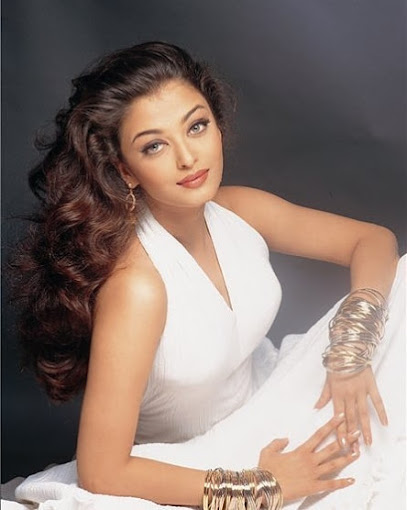 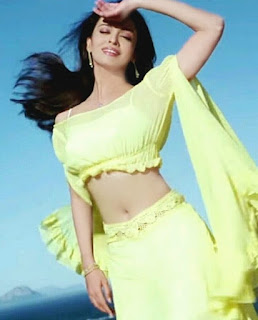